When the UN Sustainable Development Goals (SDGs) were adopted in 2015 the year 2030 seemed far away. Within 15 years the goals are set to have contributed substantially towards ending poverty, discrimination, destruction, violence, climate change and unequal access to resources on a global and local scale. They are ambitious and they need to be. The implementation of new policies, short and long term strategies and particularly guarantees of equity  and participation are essential to achieving the goals. At the same time a critical view is called for, as the goals are still based on models of economic growth that lie at the core of the problems that they are  intended to address.

In order to make the 17 SDGs known to the public and take them out to communities for debate and participation a new project was initiated in the city of Hamburg. “globalgoals.hamburg” was started by two local education activists, Friderike Seithel and Liz Kistner.

They see the move towards a more just and ecologically responsible system for sustainable development as essentially a cultural task which poses a challenge for society as a whole – including government and non-government organizations. Creative and participatory formats to take the goals into the public were chosen because sustainable development demands this – and art can respond by developing comprehensive ideas and visions, transcending boundaries, showing contradiction, by rearranging forces, by innovation as well as allowing for irrational and ambivalent elements. Art can be a catalyst for unbiased and unconventional views, which are certainly needed in the debate around global sustainability goals. This is what the initiators of the project “globalgoals.hamburg” have in mind. Discussion and debate, planning and implementation should take place on park benches, in buses and on the streets, in universities and communities, in city halls and schools.

The first banner was mounted in a highly frequented public space (Neuer Kamp 32, 20357 Hamburg) at the end of June 2017. It was designed in a discussion process and finally created by the artist Eckart Keller. It took up SDG 1: End Poverty – just before leaders of the economically most powerful countries descended upon the city for the  G20 summit in July.

In an interview the artist states that “…given the complexity of the issue one could not simply create an image of poor people. This is what the media do all the time. It was important to explore what the underlying causes for poverty are and what can be done to end these. … 80% of people affected by hunger and extreme poverty are living outside of the cities. The ideal that is illustrated in the painting is based on mixed crop and high diversity. What we see instead is the destruction of diversity,by the use of glyphosate, monoculture, seed monopoly, land grabbing and other destructive strategies in the name of progress. … This painting also relates to the context of the G20 summit. I think many people share my view that the strategies to end poverty in fact exacerbate the problem.”

A second banner dealing with SDG 6: Clean Water and Sanitation was created by Shraddha Shrestha (Macha_73). She is working as an illustrator and street artist in Kathmandu/Nepal.

Access to clean water and sanitation has been endorsed as a Human Right by the UN since 2010. There is not a shortage of clean water in the world, there is unequal and unfair access to this fundamental life source. 9% of the world’s population lacks access to clean drinking water and 30% of all people are not provided with basic sanitation services. Those most affected are women and children. While some regions are faced with geographic conditions and consequences of climate change others are simply robbed of their resource by extensive overuse and pollution of ground water supplies. Problems around water supplies are closely related to the global economic system. Many countries have externalized their intensive water consumption to other regions by importing consumer goods that require extensive use of water, for example in the production of meat, textiles, food stuffs or flowers. Enjoying a cup of coffee in Germany costs 140 litres of water, producing a litre of milk involves 1.000 litres of water and a kilo of beef up to 15.500 litres.

A third banner was installed in June 2019.  It depicts the interpretation of SDG 5: Gender equality and was created by the artist Bernhard Krebs. He is part of an art studio called “Die Schlumper“, where artists with a variety of  talents and handicaps work on their own artwork – some on common and some on individual themes.

The collective chose the issue of gender equality, stating that they are dealing with this issue every day. And so are probably most of the people living in the city of Hamburg and all over the world. We therefore included the languages spoken by the largest population groups in the city on the banner. While searching for the correct terms and translation we already found ourselves in the centre of the debate around gender equality. This is precisely the intention of the project. Feel free to contribute by posting comments or questions! The debate is a public one.

At an international conference in Dar es Salaam dealing with SDGs and (inter-)cultural learning in various contexts, a group of young artists gathered in February 2020 and created a 20 meter mural along the walls of a school yard in the district of Kigamboni. Leonard Meck Mwanga explains the ideas behind the images in a video clip. An image from this mural was chosen to become the next mural banner in the city of Hamburg, which is a partner city to Dar es Salaam. Ronald Ssemaganda (Kampala/Uganda) designed the image that reflects SDG 13: Climate action.

“Art has a lot of meaning to me,” says Ronald. “It is one of the ways I can truly express my ideas and feelings and I am able to share them with people. I think art is one of the biggest ways we can change the world. … Art as a form brings people from different place together. Art gives people a chance to have their opinions about things as they can share what they think about it.”

He elaborates on his thoughts: “The idea of the painting was to show the outcomes of climate change and how we handle our planet, how it would be if we don’t start to change as soon as possible. To show how we would live in the future if we don’t act now. In the painting is a very dry landscape, dry trees, plastic bottles and an astronaut breathing through a yellow plastic jerrycan. The idea for the painting came from how I picture the world with all the effects of global warming. I see a world with no plant life, no oxygen for breath from the plants since they are all dead, a toxic wasted place with no life. The astronaut depicts the conditions of how we will have to stay alive, wearing masks and suits. … The birds and the trees show that whatever we do right now will not only affect us humans but every living species on earth and we will have to take responsibility for the things we did. I wanted as a painter to give the public a picture of how our planet will look like if they don’t stop and start being the change.”

Sharing this message across continents has been a particularly rewarding experience and we thank all participants who helped to make this possible!

Nothing is as it was – 2020/2021 a pandemic marked every corner of this world within a short space of time. It has affected people in remote and urban areas all over the world – but in very different ways.

This motivated us to take a closer look at SDG 11: Sustainable cities and communities. As this project is based in the city of Hamburg, the second largest city in Germany, we approached students from the local school of architecture and town planning at the Habour City University (HCU).

Their positive response meant that we could journey with their thoughts across the world to grapple with the challenges and chances of creating and re-creating city and community spaces to be and become places of quality for all who live in them. This is the banner which carries the message that we need to start in the cracks of the present to build a just future:

It is with great pleasure that the project team was able to establish contact to an art class and teacher at Marion Dönhoff High School in Hamburg’s western suburb of Blankenese. Students in this course decided to embark on an intensive exploration of what SDG 12: Sustainable production and consumption. With the support of their art teacher Simone Reindell and the graphic designer Ulrike Sommer they took a critical look at what consumption and overconsumption means and who benefits from it. In addition they worked on what criteria need to be considered when taking thoughts and messages through art into the public. From the different designs and sketches they finally chose the work of Fine Engelbert to become the design for the banner on SDG 12. This was installed (and celebrated) just before the summer holidays at the end of June 2022. Fine’s design sends a very clear message – here it is:

The initiators of “globalgoals.hamburg” not only want to focus the discussion around SDGs on the context of the particular issues raised within each goal, but particularly also on what systems are in place that prevent justice, equity and negotiation, access to and shared control over resources in order to build communities and societies that are truly sustainable, interdependent and deeply respectful of human rights and development.

The project team, Friderike Seithel and Liz Kistner, can be contacted at: 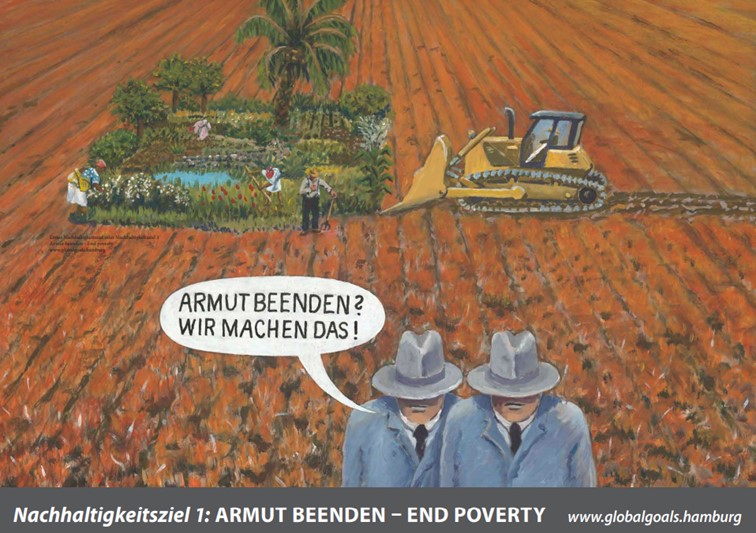 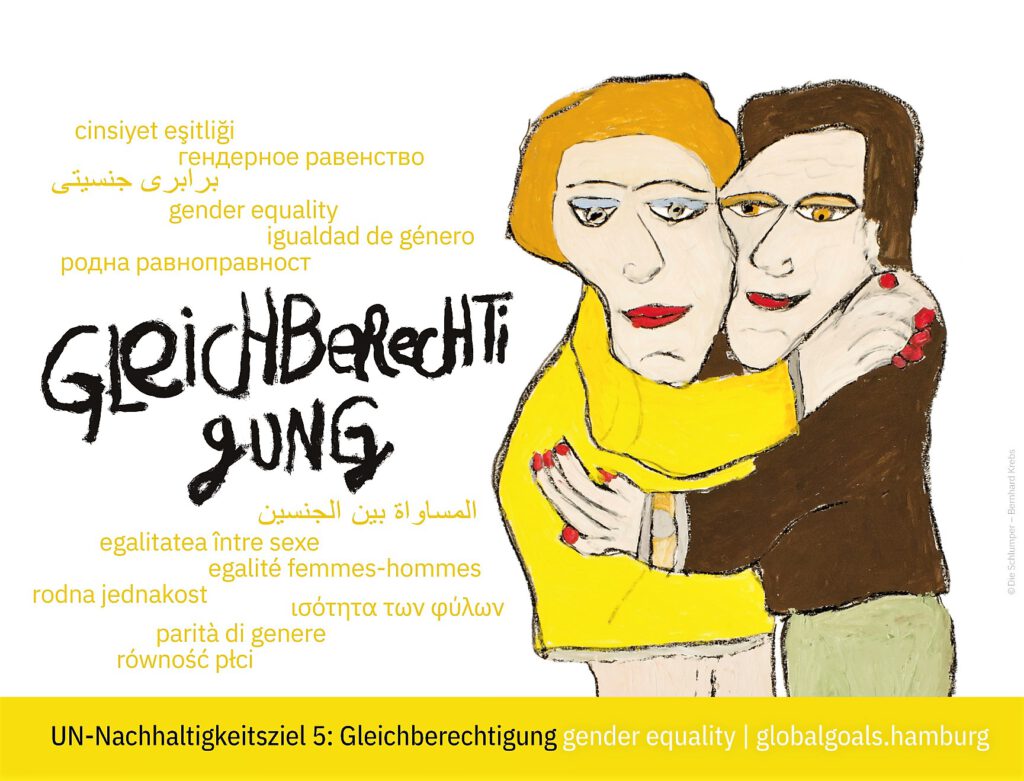 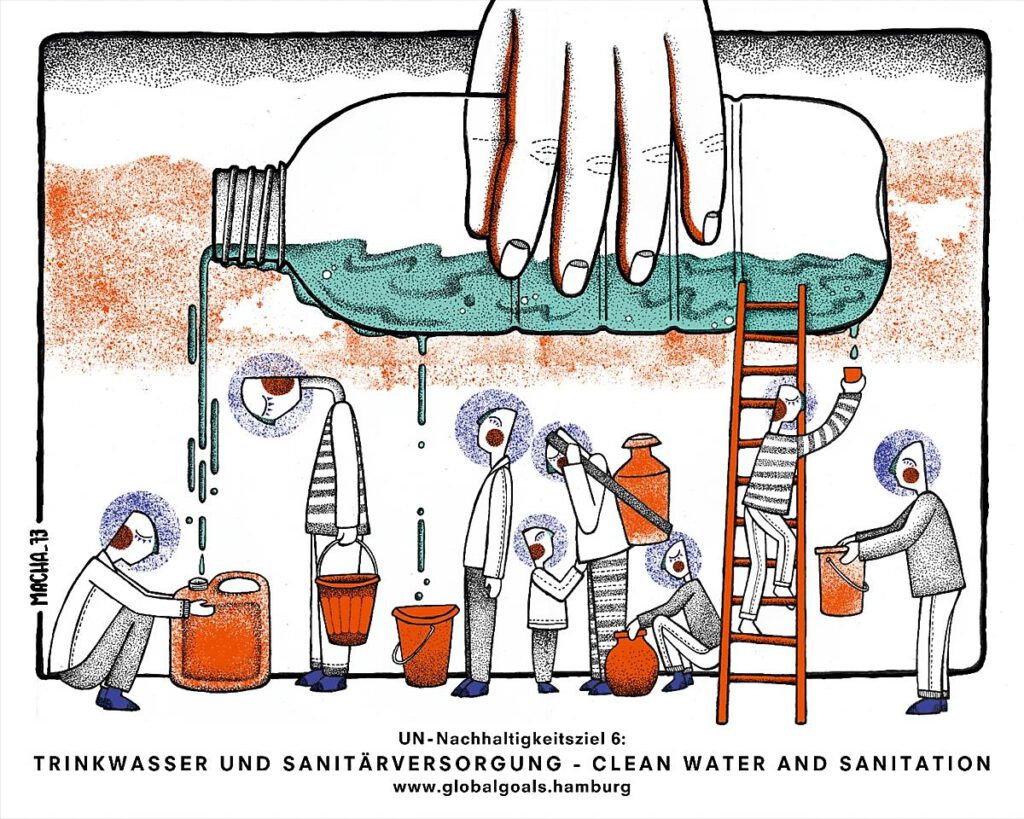 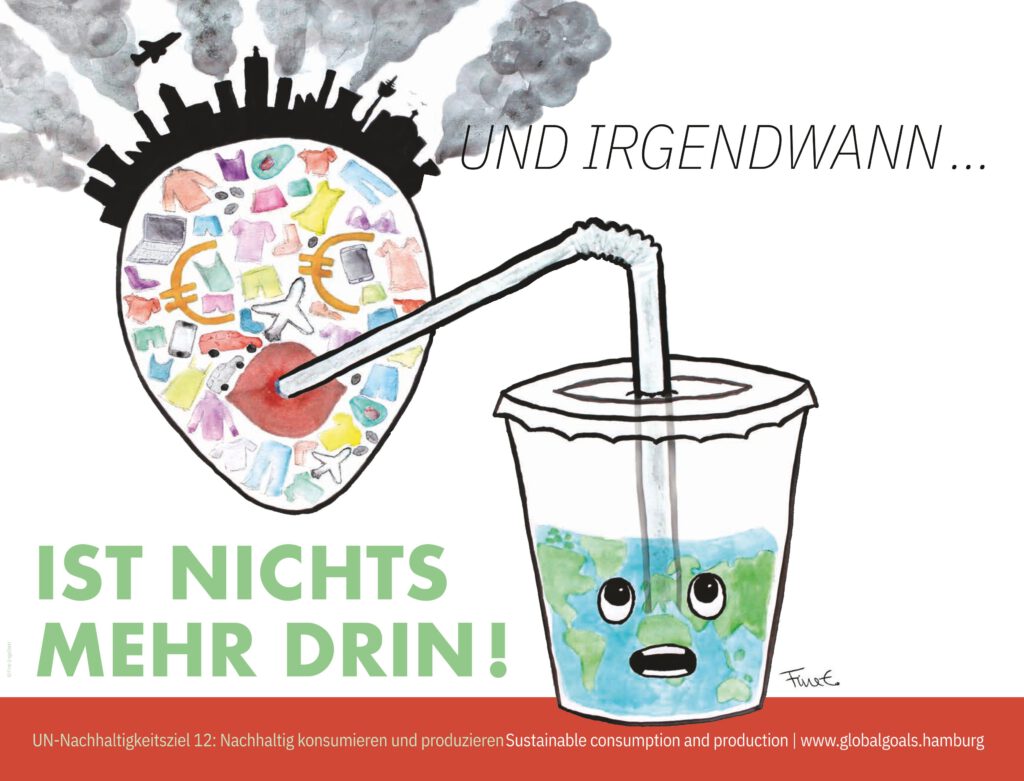 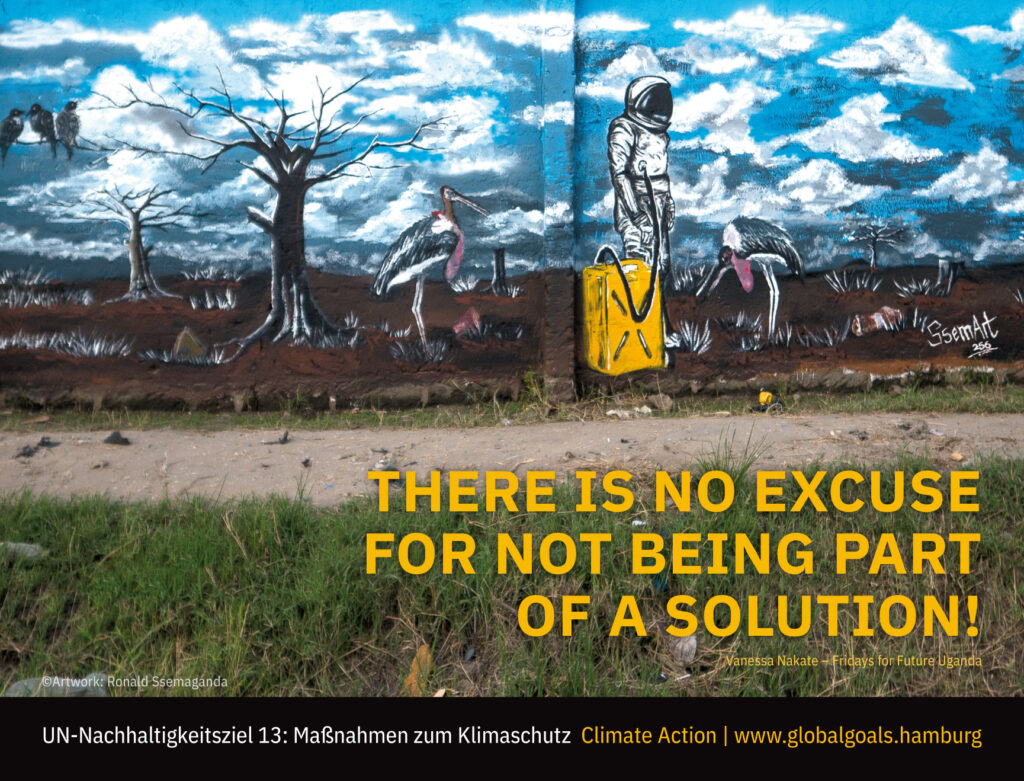